Perspective, an initiative of the NISAU UK, is Britain's leading forum designed to enable meaningful and constructive engagement with, and about, India. It is an a-political and a-religious forum based on the principles 'Engage | Enable | Empower'. The Perspective umbrella was launched in October 2017 by the Hon Member of Parliament Virendra Sharma.
In August 2018, the annual India Perspective townhall was launched at the London School of Economics. The keynote speaker at the event was Mr Rahul Gandhi, President of the Indian National Congress, and the event was held in conjunction with the LSE South Asia Centre.
2019's annual India Perspective townhall is being held on 23rd October 2019 at King's College London. The keynote speaker at the event is Dr Raghuram Rajan, noted economist and former Governor of the Reserve Bank of India. He will be joined by Sam Pitroda, eminent technology entrepreneur, philanthropist and former advisor to Prime Minister Rajiv Gandhi. 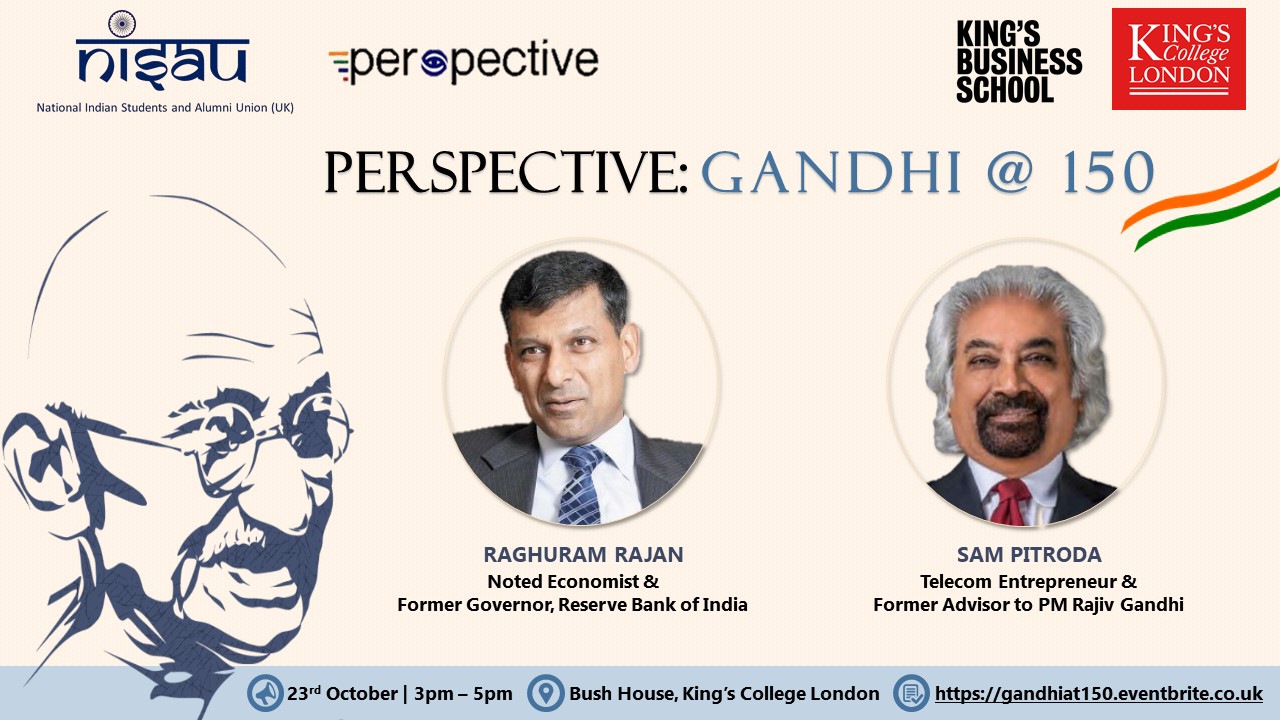 Join Dr Raghuram Rajan, noted economist and former Governor of the Reserve Bank of India and technology entrepreneur and philanthropist Sam Pitroda for an interactive discussion exploring the relevance of Gandhi to today's economic and business challenges.
Martin Luther King, Jr. said, "We may ignore Gandhi at our own risk". Today, as we celebrate the 150th anniversary of Mahatma Gandhi's birth, his humanism and vision of a world where every citizen has dignity and prosperity is as relevant as ever.
Our discussion will explore how many contemporary movements, from sustainable development and certified B-Corp businesses that balance purpose and profit, to the non-violent resistance strategies of the Global Climate Strike have their roots and inspiration in Gandhi's thinking.
We will also consider how we might apply his philosophy to future challenges, such as the impact of Artificial Intelligence and Machine Learning on employment, managing diversity in the workplace, and the relevance of the principle of economic self-reliance to today's debate about the social and economic impact of globalisation.

Dr Raghuram Rajan, former Governor of the Reserve Bank of India and Katherine Dusak Miller Distinguished Service Professor of Finance at the University of Chicago Booth School of Business
Sam Pitroda, telecom inventor, entrepreneur, philanthropist and former Advisor to Prime Minister Rajiv Gandhi
This event is the annual India townhall of the National Indian Students and Alumni Union UK and is organised in partnership with King's Business School.